A unique t-shirt inspired by ancient China and Chinese mythology!

According to legend, the Yellow Emperor (黄帝 Huáng Dì) is a mythical Chinese ruler who reigned in the 27th century. before JC.

He would be the father of Chinese civilization as well as its first emperor. It would also be during his reign that writing and Chinese martial arts were invented.

On the front of this t-shirt, you can find his name 黄帝 (Huáng Dì), which means Yellow Emperor, marked in ancient Chinese script.

On the back of this t-shirt is a Chinese dragon with the Chinese character 龙 (Lóng) in ancient Chinese script in the middle of the design, which means “dragon”.

The dragon represents longevity, wisdom, as well as perseverance and success.

Symbol of Chinese emperors since the Yellow Emperor, the latter, having reached enlightenment, would have joined paradise riding a yellow dragon.

Today, many Chinese still refer to themselves as “descendants of dragons”.

Each Yellow Emperor t-shirt is unisex, high quality and 100% combed and ring-spun cotton. Soft and supple, it is very comfortable and will go perfectly with your everyday outfits! I love the design and it fits me perfectly 😍✨ 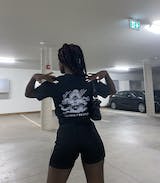